A Good Ole Christmas Catch Up

Well Rant readers. It's almost the end of another year - seriously, how do we get through them so fast - and I realised I've been absent a lot this year. So, as it's Christmas - as if you could possibly escape the fact - I thought a good ole Christmas catch-up may suffice.

And speaking of shit Christmas films, which we at Flat 19 are rather fond of, because of the schmaltzy, sickening, wholesome nonsense of it all, I have to say Netflix has got a few gems this year. And you'll start to notice the same actors appearing in them over again. Yes you, the guy who is also in Bitten. Ha ha. You're in at least two of them, probably more. You have to have a certain face to be able to pull off such sweet smelling tosh as this. But really, when you're putting up the decorations, or pottering about the house, or you have little to no brain capacity as it's the end of the year and you're done, then these types of films are perfect. No brain power required.

And I thought Netflix calling out the people who had re-watched the Christmas Prince film over and over, was hilarious! Though it made me realise they know how many times I've re-watched Season 1 of Riverdale. Ooops. Ah well. I'm not ashamed. And I'm sure some people will have watched it many more times than I have.

Anyhoo, enough about that, let me take you back a couple of months to Halloween. This year we had decided to do something big in London. I love Halloween. I love dressing up as something other than myself - that gets old! So, we booked a Halloween Ball at an old theatre and were promised entertainment and all sorts of immersive theatre and music and excitement. There were various rooms and it would be going on from 9pm until 4am. Now this was the Friday before Halloween and also the release date of Stranger Things 2. And so, I had no intention of getting there early, as I wanted at least two episodes before we left. And I got just that.

After some umming and ah-ing I settled on: gothic air hostess as my costume. And pleased with it, I was. I basically raided all my black and red wear including a corset and so many accessories from my more alternative days. And it went something like this: 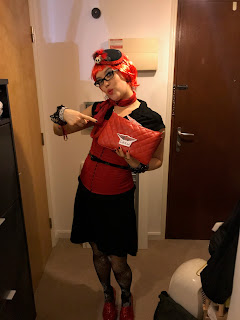 I was thrilled with the wig, which I might add was purchased from the pound shop the previous year. Not too shabby for a quid. And so, after our two episodes of Stranger Things 2 and a nice dinner to counteract the inevitable alcohol, we set off, making a few friends along the way, most of whom couldn't understand why we were dressed up, as Halloween was still 4 days away. And we arrived to a queue and a lot of youth. They had made a great effort with the dressing of the venue and there was a huge space to dance, however, when we went to explore further, that's when we found the free breasts and unnecessary willies. Yes I am a prude, but really, the guy who's costume consisted of a chain around his willy..........what? I saw the same set of breasts too many times and there was a room where people were being massaged by the severed limbs of shop mannequins. Upstairs there was a feasting room where naked servants were feeding you by hand. We did not eat. These performers later came downstairs and danced in the caged with many a willy a flopping. Hooray for my myopic eyes.

And so, we concluded that a lot of work had gone into it and all the live music performances and the effort put in was great. There was even a room where you could lie in your coffin, choose a song for your funeral and then with headphones on, people could dance at your wake. Macabre but brilliant! But, the nudity was a bit much. The last thing you want to accidentally catch a hold of whilst dancing is someone else's genitals. Or is that just me?

And so, moving on to November, which was a busy month for old Rants here, I took on the challenge of NaNoWriMo. Those of you unfamiliar with this lengthy acronym, it means: National Novel Writing Month, and it is a worldwide challenge for people who want to write a 50,000 word novel in 30 days. It's about discipline and making time to write and working towards a deadline, and having a goal and pushing yourself to create something without really having time to think decisions through. I completed the challenge once before in 2014 and was ready to hit back with a sequel to the first book, which meant a lot of re-reading and trying to remember what the crap had happened in the first book.

I wrote seat of my pants style, which means no planning, and it was much tougher than last time, as you actually had to have things make sense and correspond to the first book. You couldn't go off on too many a tangent otherwise you lost the overall framework - not that there was an overriding framework - and it was a lot of fun, but hard work. Not least of all because 3 of the weekends in November we were away, either at my parents, visiting the Giant's Causeway, or with friends on a boat trip.

Have ideas, will travel. And so NaNoWriMo 2017, became all about where are you going to write and how exactly are you going to fit it in and what mode of transport are you going to be on? Oh and I also had a week off work because I caught the dreaded flu and even writing for half an hour became too much as it completely drained me. So how I managed to complete it a day early with over 51,300 words, I'll never know, though I fear it was at the expense of my personal hygiene and my ability to look after myself or the flat.

At the time I channeled a little Dr Suess and came up with this:

And so we make it back to December and all the shit that comes with the last month of the year, whether it's family guilt trips or the stress of present buying, or the fact that the world is crumbling around us and the powers that be are still the powers that be, or you have sixty reports to write, or you're just sick of Christmas before it even begins, and that's where we find ourselves.

Does anyone else see someone - probably their other half or a friend - wrapping up and just think, no, stop, please, enough. I had to stop A from massacring some presents yesterday. I'm not fastidious about many things, but after years of lectures on the subject of wrapping, from my mum, who is much better than I am, I couldn't not say anything.

This year is an Italian Christmas followed by a Wigan second Christmas and New Year, so I have set myself very strict ground rules, to ensure I don't achieve full whale status by the end of 2017:


Well, I'd better skoot as it's almost lunchtime here. Wherever you are for the holidays, I wish you all joy and cheer. If Christmas is a bad time for you, then I wish you the strength to keep putting one foot in front of the other and just see it through. It is actually only one day though the way it's thrown down our throats from August onward, you wouldn't think so. You can do it. You can get through it.

Rants out for now. Thanks for the catch-up.


Posted by Helen Richards at 4:11 AM No comments:

Helen Richards
I write YA novels and am seeking representation for my debut submission. I rant in my personal blog: rantsofabitternortherner. And I blog about travel in thesarkytraveller. I live in London but am a proud northerner so expect some Lancashire charm. I am an expert in speed tourism and am working on my debut picture book too. (Writing not illustrating.) I read obsessively and just about find the time to teach Early Years Music Classes and bake! Oh and I love to name inanimate objects and gaze at the clouds.