KT 2: From A Loftier Perch

It is almost impossible to recreate a feeling once felt, to emulate an event already encountered. You can never un-see it or un-feel it, and you are unlikely to experience that again. You can never quite capture that initial shock or excitement or sheer exasperation, but that doesn't stop us going back and say re-watching a film, or putting a song on repeat. Just because we can't land that first encounter emotion again, doesn't mean we can't go back and pull more from it. Often with multiple watches or listens, a piece can present more questions, it can answer some, it can enlighten us, it can change our minds, it can offer more, and it can create links. And it is often after a numbered listen that we catch a stray lyric that has always haunted us, or identify with a background noise, or discover a kick ass bass line. A first encounter is also surrounded by a sort of shield of awe and unexpectedness that can leave you overwhelmed and unable to fully process what you are seeing or hearing. Therefore, any additional viewing can only aid your understanding of the artist and their work.

So Tuesday night saw me return to Hammersmith for another dose of Before The Dawn. One thing I am quite happy to report is that things certainly haven't quietened down. The buzz that surrounds the Apollo is a living being, feeding off the expectant and slightly hysterical Kate fans, and it stretches across the roads into the shopping centre and tube station. As soon as you get anywhere near Hammersmith you start to pick out the Katie fans, those holding themselves back attempting not to break into a rendition of Wow. The energy is already mounting before you even reach the queue in front of the venue, and the merchandise sprawl is still non-negotiable. The amount of Katie tweets appearing in your feed might have ebbed, but this tour is still going strong and the feeling is electric.

I was in the circle tonight and quite far back, thus my loftier perch, but in a way that not only gave me a new perspective - a birds eye view if you like - but it almost allowed me to detach myself from that eye level connection with the stage and float above it all, to experience it a different way.

Before the show started we were given the 10 minute call and the five minute call, and I realised again how Katie manages to bring that level of mystery and understatement to her tour. We are told that in ten minutes the performance of Before the Dawn will commence, but there's no mention of her by name. It's a show by her and starring her, but not about her. It's about the story and the songs, and how she weaves them together to form the greater narrative.

I have to say it is slightly strange when you can anticipate which song is coming next, but when you know you're getting some corkers, you get over it pretty quick. This time round her vocal licks and embellishments were freer. She was experimenting and losing herself in the moment, which had some wonderful effects on the atmosphere and also showed her having fun. As expected the set list was strict and tight and this was because what you were actually seeing was the world's most bizarre yet beautifully constructed musical, written by and starring the goddess herself, with a large ensemble cast and chorus.

It seemed the performers were also playing around a bit with the scripted parts and just bouncing off the audience reactions. The house scene was like something out of a Weasley family exchange at the Burrow. It had that kind of feel to it. And I love the Toad in the Hole mention - my favourite meal as a kid and still in my top three now.

I mentioned the likeness to a musical - obviously one of the highest quality - and I feel that was further shown at the end of the first half, when all the cast came back on stage for the final song and there are even choreographed dance moves. It nicely rounds off that act, and sets up the second half.

Looking down from on high made me feel like the clouds of the storm, or the birds in her Sky of Honey, or the clouds she will later be busting. Being in the circle feels like you're more of an observer than a participant. But being in the stalls, on a level with the stage created a feeling of somehow being involved and contained within the action. I'm glad to have experienced both, as it definitely gives you a varied perspective.

What became clear on this second viewing was how everything is beautifully linked. At first look there are three clear sections to the show, but when you delve deeper, it is one narrative with branches off here and there to expand and continue the story. And it is about the the way her voice, the band, the performers, screens, additional effects and lighting all contribute to make the piece a whole. There are repeated themes and motifs which aid the cohesion of the work and it is never static. It pulses, undulates, zooms and whooshes. It presses you down, soars up high and hovers in between. It heightens the senses, pulls, gnaws and tears at the emotions and is tied together with a lovely Cloudbusting bow.

I got so much more out of the second half this time round and even more from the show as a whole because I was starting to see it as it should be seen: as a whole show. Everything that was done was carefully and meticulously planned in order to propel the story forward; from the lights to the repeated themes and vocal licks; the clouds and the storm, to the wind whistling through the house. This is a feat of engineering, technology and above all imagination. And boy did she pull it off.

I eventually managed to bag myself a bit of merchandise by Running up that Hill, well actually legging it down the steps, at the interval and charging to the merchandise stand. I overheard some interesting conversations, including a debate on whether the Ninth Wave appeared on Hounds of Love or The Sensual World. Duh!  I had to jump in on that one, couldn't help myself. And once more I have been in a room with Kate Bush. Honoured doesn't quite cover it.

There's a bit of a wait until KT number 3, so normal rants may resume.
Thanks for reading.

Oh and here is my Kate Bush themed birthday cake from last week. Taken from a page in the programme, modified and recreated by my extremely talented mother. And it's pretty darn tasty too. 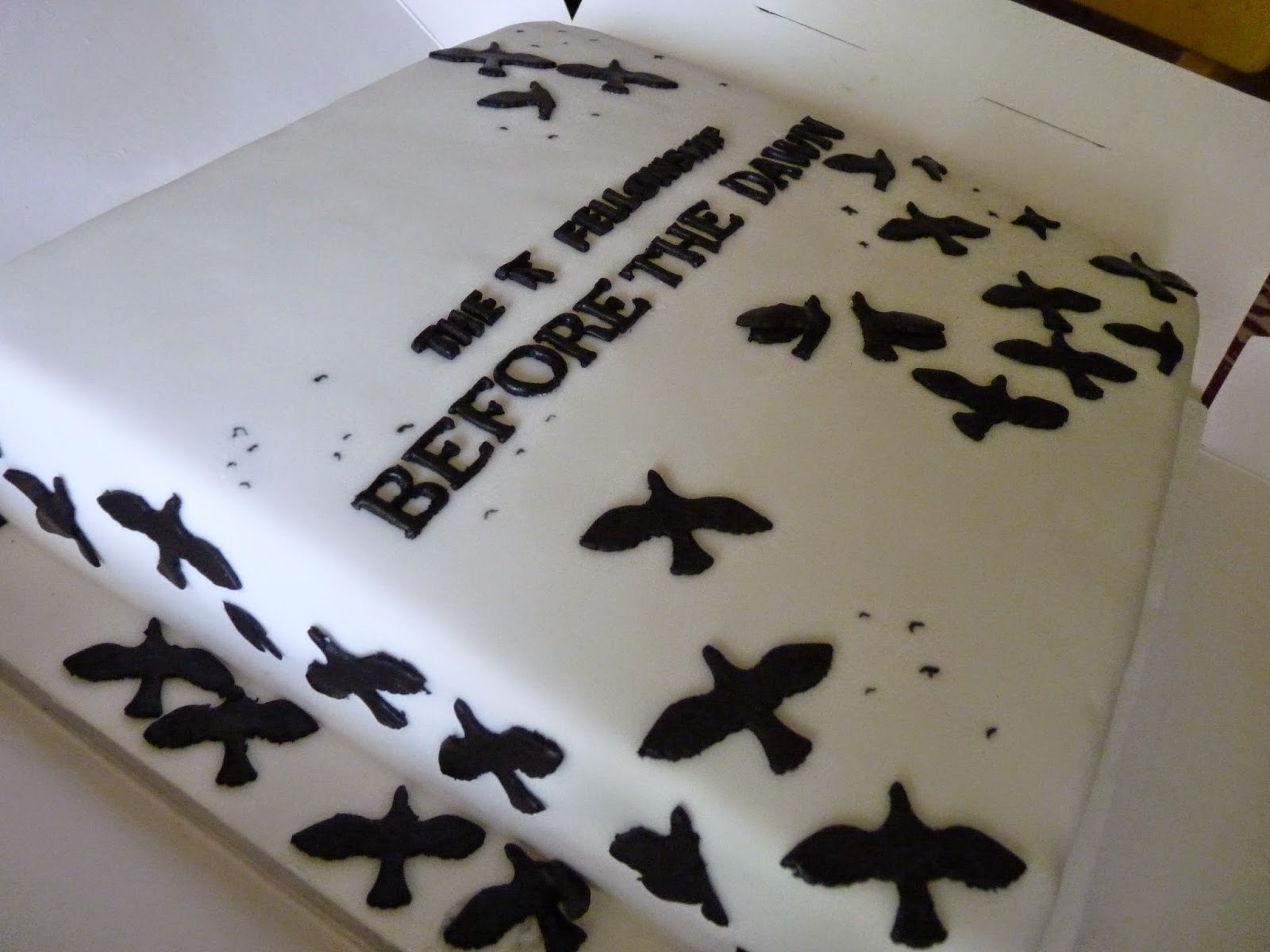 Helen Richards
I write YA novels and am seeking representation for my debut submission. I rant in my personal blog: rantsofabitternortherner. And I blog about travel in thesarkytraveller. I live in London but am a proud northerner so expect some Lancashire charm. I am an expert in speed tourism and am working on my debut picture book too. (Writing not illustrating.) I read obsessively and just about find the time to teach Early Years Music Classes and bake! Oh and I love to name inanimate objects and gaze at the clouds.